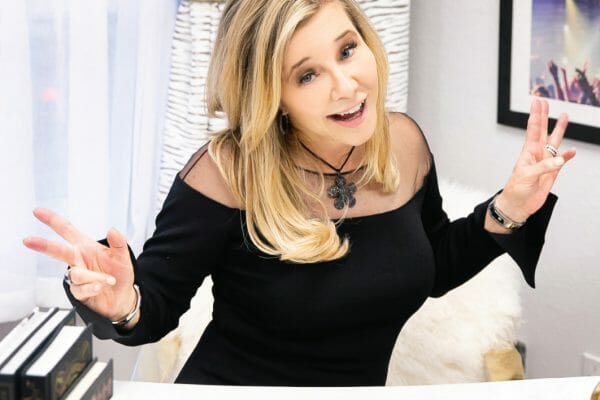 The power of Music

Bringing people together for live music does something powerful, something Kathyrn Burns has seen happen time and time again at Park City Live.

“It’s hard to explain the power and influence of music,” she says. “Music is an escape. It’s a way for people to get away from their hectic lives and come together. When I listen to music it’s almost like a meditation. As I sing the words, the memories conjured up by the song and the meaning of the lyrics literally take me away.” Booking acts and putting on events that bring about that feeling is what Burns loves about Park City Live, a concert venue she has owned and operated since 2012.

Unlike most venue owners, Burns doesn’t have a history in the entertainment industry or a musical background. In fact, she’s a self-described “numbers gal” with an undergrad in engineering and an MBA in finance. After taking a step back from her career and having kids–a son, Connor, and a daughter, Corinne–she was ready for a new challenge.

“I’ve always loved music and I have a knack for lyrics and a good ear for it. I wanted to do something different and I knew that opening a venue in Park City would be a unique adventure,” explains Burns. “I wanted to open a small, quaint apres ski restaurant but this opportunity kind of landed in my lap and I decided it was the challenge I needed.”

Anyone who’s seen a show at Park City Live knows that “small” is not how you’d describe the space. It’s the largest music venue in Park City with a capacity over 850, a giant stage, and state-of-the-art lighting and sound systems. “Small” also isn’t a word you’d use to describe the acts Park City Live hosts. Burns and her team have brought stars like Snoop Dog, Avicii, the Foo Fighters, Calvin Harris, The String Cheese Incident, One Republic, Drake, and Macklemore to town. And it’s not always the type of music you’d expect to find in a mountain town, which is what Burns loves about it. “We bring all genres of music to Park City, from EDM to country to pop to rock n’ roll; my goal is to have something for everyone.”

In addition, Burns says “As Park City has developed into such a high-profile ski town, Park City Live has really kept pace by transforming the venue from a simple nightclub into a world-class concert venue.” She says, “I can’t tell you how many of my customers have told me that when they are deciding where to take their ski vacation one important part of their decision is the type of nightlife and caliber of music the town has to offer.” Burns feels excited and blessed to play a part in building up the attractiveness of Park City to promote tourism.

Not only does Park City Live entice locals and visitors, but it has also impacted her own family, primarily her son Con-nor. After growing up with Park City Live–and meeting his idol, Skrillex–he started his own career as a budding EDM artist, recently signing a record label deal with Capitol Records.

“Park City Live has been a positive influence on the community, but I never thought it would have such an impact on my kids,” Burns says. Looking back, she knows better. Music does that. It may be hard to explain, but music has a magic to it that inspires, changes, and brings people together.